Santorini set to sail into Manhattan in March 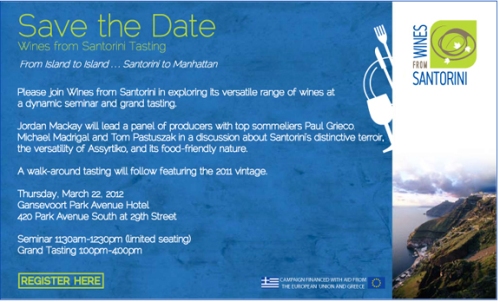 Greece to be featured at New York Wine Expo 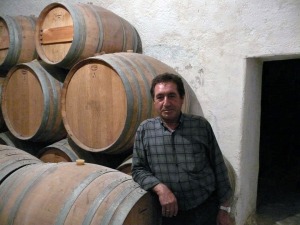 It is with sadness that we note the death of winemaker and friend Yiannis Argyros. Yiannis died Dec. 12, 2011 at age 64. His grandfather founded the winery and under Yiannis’ guidance, the winery became known for its stunning Vinsantos, not only raising the wine’s profile among critics, but also giving proof that only Santorini can produce the real Vinsanto.

But beyond his talent for winemaking was his character: a modest man of few words who loved his family and his horses. He could be seen riding along the beaches, in the shadow of the mountain over his winery. He will be missed by all his friends and admirers in the wine world.

In New York City last month, Frederick Wildman and Sons hosted a tasting of its new Greek portfolio, which includes wines from Koutsoyiannopoulos Winery. Dionysi Grevenitis, the portfolio manager, said the representation gave Wildman a solid foot into the world of the most exciting emerging wines. The importer hosted a tasting dinner of the wines, and in a tongue-in-cheek nod to the popularity of Assyrtiko, titled the red-wine-based event “Assyrtiko No Longer.” We’ll take the compliment!

Our very own hot shot!

With pleasure we note the recognition shown to Sofia Perpera, who was recently named to IntoWine.com’s annual “Top 100 Most Influential People in the U.S. Wine Industry.” The list recognizes top influencers in wine; from how it is made, marketed and talked about to how it’s shipped and shared.

Sofia founded and is Director of All About Greek Wine, which administers the marketing and promotion of the Greek wine programs in the U.S. and Canada. She has assisted in updating Greek wine legislation and creating educational programs for the wine sector, and serves as a judge in international wine tasting competitions.

HARVEST REPORT: 2011 Santorini: aromatic and fruit-forward
Winter rains and an absence of extreme weather conditions helped the Santorini vineyard produce healthy, high-quality fruit for all varieties grown on the island, of which Assyrtiko is the primary grape. The harvest began Aug. 12 and ended Sept. 10. The grape yields were at average levels and comparable to the last three years. Producers were satisfied with yields that averaged between 3000-3500 kilogram per hectare.

The favorable conditions — plentiful rainfall, lack of extreme heat, coupled with the characteristic cool breezes of the island coming from the north, known as “meltemia” — allowed the vines to flourish and the grapes to mature evenly without excessive alcohol volume.

Gaia winemaker Dr. Yiannis Paraskevopoulos, who produces Thalassitis and Assyrtiko Wild Ferment, said there were more aroma and fruit than average in this year’s harvest.

“2011 is quite comparable to 2009—both vintages were great. We saw a rather cold August, which led to extremely healthy berries and rather aromatic. I think it’s a really brilliant vintage—quite balanced,” he said.

Summer’s cooler temperatures also played a role in this year’s grapes producing more aromatic wines, similar to the harvest of 2009. The must during this year’s fermentation indicated that the wines should yield excellent results overall—possibly one of the better vintages in recent memory.

“The grapes were extremely healthy, with a crisp acidity and minerality, as they usually do, but the bonus derived from this rather ‘fresh’ summer was the increase of the aromatic intensity. The wines have a more distinct fruitiness than what they do on a conventional harvest, such as 2010,” Paraskevopoulos said. 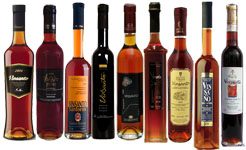 Sweets for a sweetheart’s holiday: Prompted by a story in the online wine digi-mag, Winacea about Vin Santo v. Vinsanto, Wines From Santorini launched a week-long showcase of Vinsanto on Facebook and Twitter. Just in time for Valentine’s Day, the mini-campaign highlighted with a daily tag, “Reason to Heart Vinsanto,” and daily picture.

This entry was posted in Uncategorized. Bookmark the permalink.