Press tour explores Santorini’s charms and drinks some wine, too.

JOURNALISTS AND BLOGGERS arriving in Santorini last month were treated to sights and sites—ranging from the renown sunsets from the Oia vantage point to the newly reopened ancient ruins of Akrotiri, Greece’s own (and more ancient) version of Pompeii. The group—Mary Cressler, Jameson Fink, W. Blake Gray and Linda Murphy—were the among first American journalists hosted by Wines from Santorini to explore the ruins. The site also served as a reminder of Greece’s claim to having the oldest wine-making culture in the world: Archaeologists have found indications of ancient wine-making here.

After a day in ancients digs, the group visited the more modern, but still-traditional Gavalas Winery, built into the volcanic rock in the tiny settlement of Megalochori, where fourth-generation owner George Gavalas still uses foot treading for the Vinsanto grapes. Margarita Karamolegou, one of Santorini’s young winemakers, provided tastings of the steel-fermented Assyrtiko, Nykteri (oak-fermented and aged Assyrtiko), and Katsano, a native white variety. A highlight included tasting a 50-year-old Vinsanto made by Gavalas’ grandfather.

It was appropriate to taste the wines of Haridimos Hatzidakis at Selene Restaurant, a progressive restaurant that features artisanal food products of Santorini. The Hatzidakis wines are made from 100% organically grown grapes and native yeasts—as close a taste of the island as it gets, and an fitting complement to the local fare. Also on the table: 100% Aidani, as well as some single vineyard releases of Assyrtiko, steel and barrel fermented, and Vinsanto. 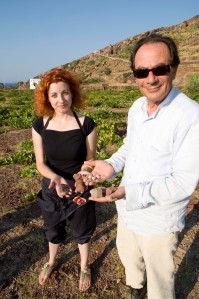 WATCHING THE SUNSET from the vineyard at Domaine Sigalas offers stiff competition to Oia’s cliffs. Here, the group toured the vineyards with Paris Sigalas, whose basket vines are among the most photographed on the island. Along with oenologist Xara Mavromati, he presented steel- and barrel-fermented Assyrtikos, including a blend with Athiri that’s garnering attention in the press. The group sampled Sigalas older vintages that demonstrate the aging potential of this variety.

One of the hidden charms of Santorini—some 30 meters underground—is the Koutsoyiannopoulos Winery museum—the second pride and joy (after the wines) of its owner, George Koutsoyiannopoulos. After a morning underneath Santorini’s famous volcanic soil, his steel-fermented Assyrtiko was particularly refreshing. To sample the ageability of Vinsanto, the group tasted from 2009 and 1959, finding the middle-aged wine to be still vibrant. A visit to the neighboring Karamolegos Winery showed the versatility of this small band of winemakers: here, winemaker Artemis makes a flagship blend of Assyrtiko, Athiri and Aidani. The winery is also known for its home-grown fava beans.

Oenologist Ioanna Vamvakouri from the progressive Boutari winery hosted the evening tasting, taking the group through a progression of steel- and barrel-fermented Assyrtikos, and the 1989 Kallisti Reserve—still a lively wine at 23 years old.

Against the backdrop of the caldera—the undisputed best view of anywhere on the island—Stela Kasiola presented the SantoWines’ Assyrtikos, including a steel- and barrel-aged Nykteri and what was quickly becoming established as the ultimate closer, Vinsanto.

On the other side of the island, in the shadow of Thira, the wines of Canava Roussos—where foot treading is still used for some wines—were enjoyed in the picture-perfect trellised courtyard. Agape Roussos, in charge of promotion and communications as well as winery tastings, presented barrel-aged Assyrtikos and some older Vinsantos.

AT THE NEIGHBORING Estate Argyros, fourth-generation Mathew Argyros led a tasting through a range of Assytikos and blends. Here, no visit is complete without a tasting of Vinsantos—the hallmark of this winery (though certainly not the only award-winner here).

The trip wrapped up with a visit to Gaia Wines, where owner/oenologist Yiannis Paraskevopoulos greeted the group in the winery’s new tasting facility overlooking the sea.

An educator and tireless ambassador for Greek wines, Paraskevopoulos, almost needs no introduction, as he is unofficially the “face” of the new generation of Greek winemakers. His Assyrtiko is made with native yeasts, and he’s also experimenting the wine’s age-worthiness buried at sea. He is almost ready to release his first Vinsanto, a 10-year-old vintage, which the group previewed with pleasure.

ONE OF SANTORINI’S most elusive winemakers is also one of its most eccentric and talented. Such is the price of genius, you might say.

But if you are lucky enough to find Haridimos Hatzidakis (and if he’s in the mood to speak with you), it will be hard to figure what’s more captivating: the wines or the winemaker.

A little grizzled, sometimes a little grumpy, Hatzidakis has been called a wizard so often, it’s almost a cliché. He makes his wines in a 400-year-old cave—a cool earthy cache of dusty bottles. He farms 100 percent organically on a hardscrabble hill. He goes beyond authenticity simply because no one can replicate him. He’s the only winemaker on the island who doesn’t filter or fine, and uses natural yeast for all his fermentations.

Trained in Athens and later as a novice winemaker at Boutari, Hatzidakis went out on his own in the mid 90’s, reclaiming the neglected vineyards of his wife’s family. From the start, he was organic—not because of trend, but because “the grapes are better with more character and more close to the terroir.”

His plantings are on land and in a climate so troubled he said, pointing to ancient stucco churches in the distance, that people used to pray to protect the vineyards. Hence, Hatzidakis has become somewhat of a meteorologist.

“We want north winds and moisture to help cool the plants,” he said, shading his eyes and squinting into the July sky. He credits the water-absorbing pumice in the soil—what he calls a “magic ingredient” for providing relief from the unforgiving sun. But the sun, like the wind, like drought, are all part of the natural cycle and rhythm he embraces. And maybe that’s what makes the wines what Alder Yarrow calls “soulful and distinctive.” He even finds a certain beauty in the red and black lava that litters his vineyard, a simple philosophy that you take the good with the bad.

Hatzidakis produces about 15,000 bottles from his own property but by buying grapes from about 40 other growers, he can produce up to 80,000 bottles annually. Because he manages every inch of the soil he tends, it would be difficult to get much bigger. Any new vineyards he acquires undergo careful cleaning. A larger production could compromise the quality control he’s worked so hard to achieve.

“I look around to see what is free and if I could culture it. I wait for two years to calibrate the soil before planting the vines,” he said.

And it’s worth the wait. The 10-hectare estate produces a range of Assyrtiko expressions from blends, single vineyard, Nykteri and a Cuvee 15 Organic, as well as Mavrotragano and Vinsanto. Lana Bortolot 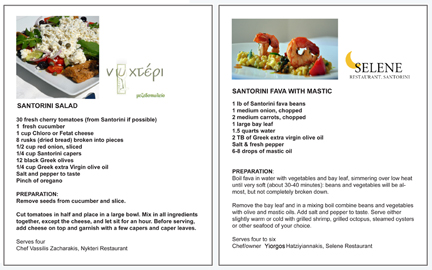 SOMMELIERS HAVE A SINGULAR Santorini swan song: Assytriko, one of the food-friendliest wines on the planet. Drink it with everything, they say. But what to eat with it? Two restaurants on the island are coming up with cuisine that strike a song in all hearts. Click here for the Santorini Fava with Mastic recipe created by chef Yiorgos Hatziyiannakis of Selene Restaurant, and here for the classic Santorini Salad of Nykteri Restaurant‘s chef Vassilis Zacharakis.

This entry was posted in Uncategorized. Bookmark the permalink.